There is a common notion that the large overcomes the small, and that therefore size does matter. We see this a lot in advertising and popular culture: bigger, stronger, faster. The world of Zen holds to another truth, a different perspective, that the small surpasses the great. 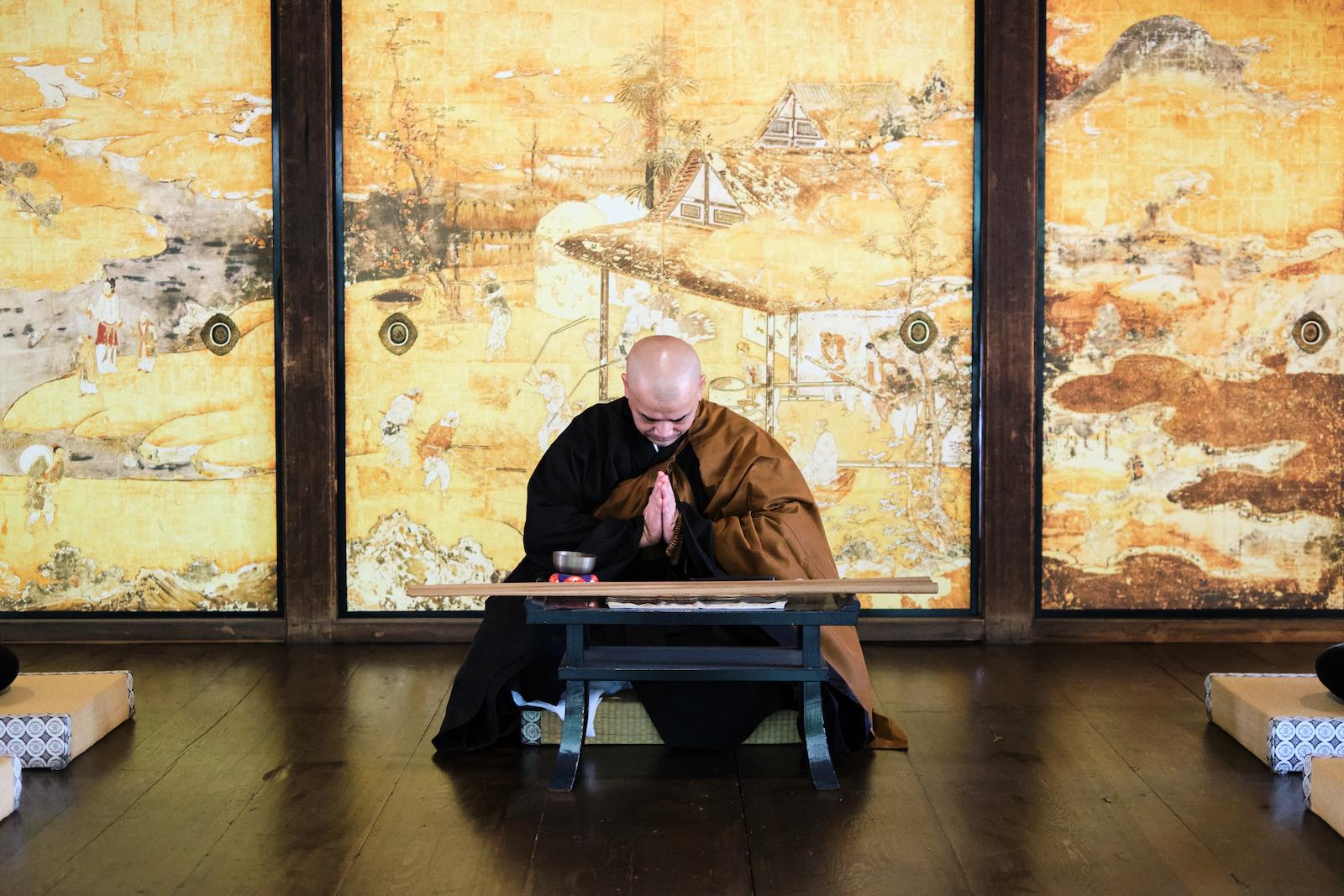 At first this doesn’t seem logical or possible, but in experience it often turns out to be true. In Zen it is a reference to the small self awakening to the larger self through enlightenment. The acorn becomes an oak tree. The child is father to the man. It isn’t through competition that the small surpasses the great, but rather through growth and transformation.

Many of the Zen inspired traditions, from Tea Ceremony to Swordsmanship to Shodō cultivate mindfulness through attention to detail in mind and body, through ritual refinement and practice. This creates the kind of transformation in which the small surpass the great.

Though both use a brush, a useful way to understand Shodō, or The Way of the Brush, is to compare it to its distant cousin Shūji, or Letter Practice. 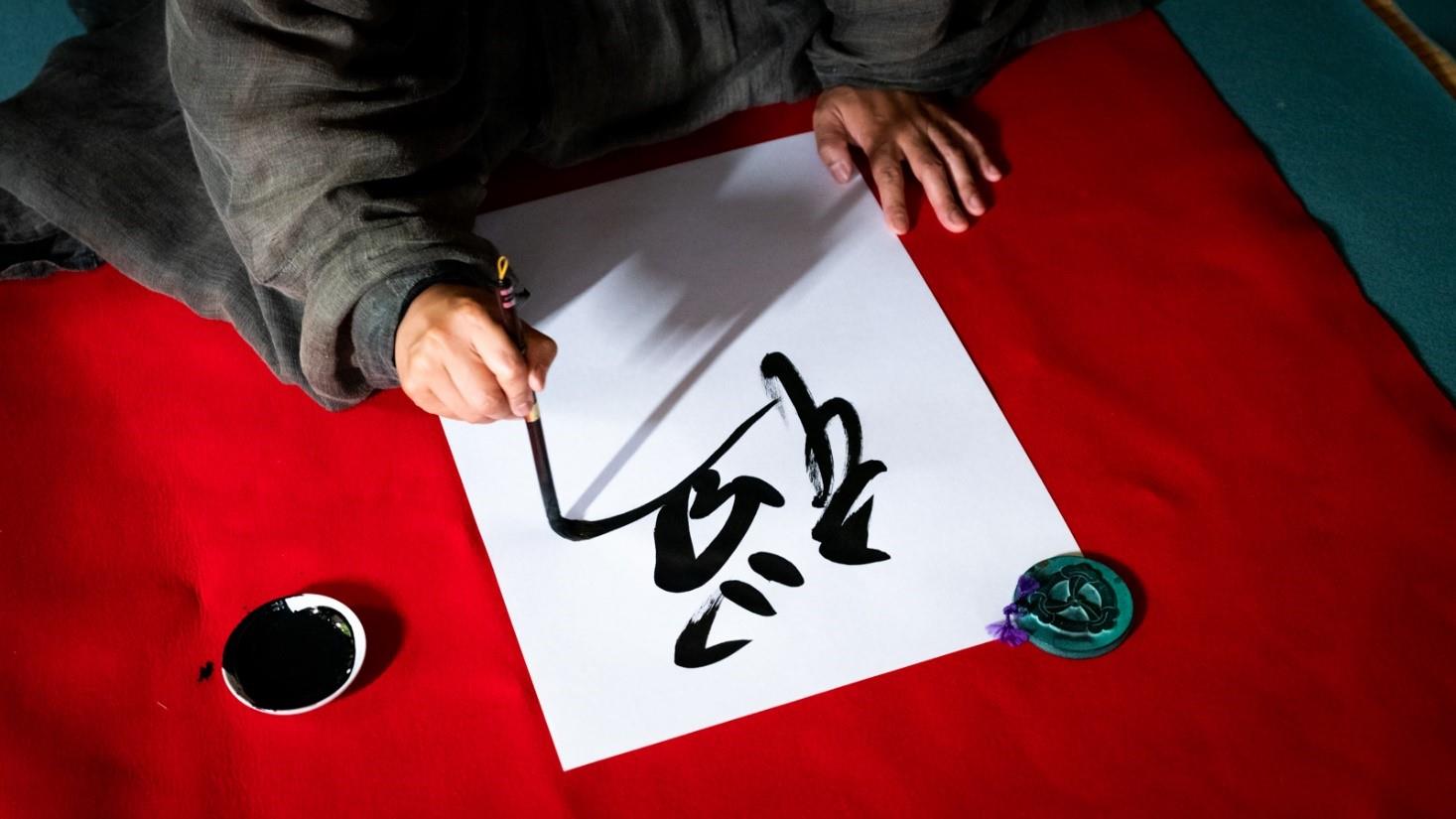 •Shūji is a subject taught in school, usually by a homeroom teacher, and generally only through Elementary or Middle School. Shodō is a lifetime study with no graduation.

•Shūji focused on the single dimension of legibility. Shodō is multi-dimensional, paying attention to calligraphic style, space dynamics, asymmetrical balance, the lifeline of the strokes, and the Four Treasures of Shodō (Brush, Paper, Sumi ink, and Inkstone).

•Shūji aims at producing characters similar to printed fonts emphasizing the meaning of the words. Shodō focuses more on tone, beauty and balance of the characters, as a musician would do in performance.

•Shūji seeks to standardize and eliminate individual habits. Shodō seeks to bring out the spirit of the characters and the character of the person holding the brush.

•Shūji like its sister Penmanship, cannot compete with artificial intelligence and technology in terms of reproducing perfect letters. Shodō expresses human qualities which can never be reproduced by computers and technology.

Shodō can be many things, an art form, a method for mindfulness, way to decorate interiors, beautiful store signage, or in Zen a form of spiritual practice.

Zen makes interesting distinctions with Shodō and uses it in particular ways. The brush paintings of Zen Masters are actually referred to as Ink Traces (Bokuseki), the implication being that they are visual traces left by an enlightened mind, not a form of artwork. These Bokuseki are often brought out to display on special occasions such as in the alcove of a Tea Ceremony. They are not on permanent display, because it is considered that the Zen Master himself is present at the ceremony, with a message for the guests to ponder and discuss. The message usually refers to a Zen Kōan or parable for meditation, often something deep like the small fish swallows the big fish. At times Bokuseki reference themes and nature scenes from poetry, and may even appear with a Sumie or Ink Painting. These range from fierce images of the Bodhidharma or Founder of Zen, to simple brush impressions of seasonal things found in Nature, to humorous impressions of people and situations, often a reference to a well known Zen Parable. A common form appearing in Bokuseki is the Zen Circle or Ensō, an incomplete and imperfect circle representing the cyclical nature of life, and that Zen training starts with a Beginner’s Mind and never ends. A famous example is the Ten Ox Herding Pictures, originating in 12th Century China, as a story depicting the ten stages of practice leading to enlightenment, and ultimately a return to daily life.

Shodō appears in Buddhism in another form of practice which involves copying the Sutras with a small brush (Shakyō). The Sutras are the scriptures of Buddhism, the words of Buddha as recalled by his disciples, which originally came from Sanskrit but were translated into Chinese and are still written that way. This provides monks and lay practitioners a way to concentrate the mind in a meditative state, and gradually reflect on the meaning of the teachings of the Buddha.

You do not need to be a monk or practicing Buddhist to enjoy or benefit from Shodō, even in these forms. Shodō did not originate with, but was rather adopted by Buddhist temples as a means of enhancing their practice and attaining enlightenment.

Shodō as a Liberal Art

Shodō was originally cultivated by the Literati, or educated class of enlightened thinkers who practiced the Five Excellences to cultivate character: Calligraphy, Painting, Poetry, Tea, and Martial Arts. In effect, Shodō is one of the original Asian Liberal Arts, and it could convey lessons in philosophy, poetry, history, art, and the humanities. In China it was required training and testing for civil servants and military leaders, leading to the expression, Mastery of Sword and Brush (Bunbu Ryōdō). The Japanese Samurai adopted Shodō along with Neo-Confucianism, although they also drew on other spiritual sources such as Zen, Shinto, Christianity, and even Mountain Shamanism in a typically Japanese syncretic approach to being spiritual but not religiously religious.

Calligraphy in Japan developed its on stream and calligraphic form in the poetry and calligraphy of the Heian Court. In the Heian Period (794~1185) the capital city of Japan was Heian-kyō, which is modern day Kyoto. The Poetry and Calligraphy of this period is considered to be quintessentially Japanese, and is still quite popular among Japanese people today. Other forms of Japanese literature include Haiku and Haiga (Poetry Paintings), which have a huge following today, though more as literature than as calligraphy practice.

Shodō as a Way from Mystery to Mastery

While Shodō can be appreciated from the outside for its beauty, literary, and poetic qualities, it is only through practice that you can move from Mystery to Mastery in understanding Shodō. Practice means learning from a teacher, making copies of Master works (Tehon), and challenging yourself to new heights through obtaining ranks and participating in Calligraphy competitions. The exposure to various styles of Calligraphy and the discipline of submitting your best work each month has a subtle effect on your mind, body, and character over time. It is said to work on you like Chinese medicine, bringing you into balance gradually over time, and without side effects.

The Tehon is like a mirror, for it reflects both the mind that you aspire to, and the mind that you are now. Much of your practice involves closing this gap. This process of copying masterworks is often misunderstood. The eye at first is very lazy at noticing detail, and the hand moves almost unconsciously by years of habit. It takes practice and feedback to be able to calm the monkey mind that thinks it knows, and create a state of mindfulness that can be expressed in the brush.

In the beginning the brush seems to have a mind of its own. Like an untamed horse it does what it pleases, and does not respond to your feeble commands. Moreover, it cannot be rushed or forced, because it magnifies every detail of your perception, mental and physical state. However, if you learn how to master the brush and work with quality materials, it becomes easier to see and easier to control. With so many variables in the materials and in the person holding the brush, there is always an element that is beyond your control, but over time this becomes not a mistake, but often a delightful discovery. Beginners barely glance at the Tehon, and then make a poor copy, often blaming their brush or materials. With Mastery you humbly learn from the brush and materials, and spend most of the time looking at the Tehon or the images it impresses you with, barely glancing at what you are writing. Even when you do original painting without a Tehon, you still draw on the images you create in your mind, and the resources you have learned in the past.

Shodō demands breath control, centered posture, full body engagement, and sensory imagination on a par with the best of classical and jazz musicians, so much so that even a short piece can leave you drenched in sweat, but full of energy and not fatigued. It is a fascinating world, which has much in common with music. Yet much of it remains shrouded in Mystery, due to language, cultural, and geographical barriers that keep it in isolation. My quest over nearly 5 decades is to serve as a guide to the wonderful world of Shodō, and bring it to its rightful place as one of the Five Excellences of the Asian Liberal Arts.

His English publications include:

Enhanced Creativity and Concentration in the Mastery of Kanji, Japan Creativity Society 2018

Brush is the Sword of the Mind, Series from Gekkan Hiden and BudoJapan.com