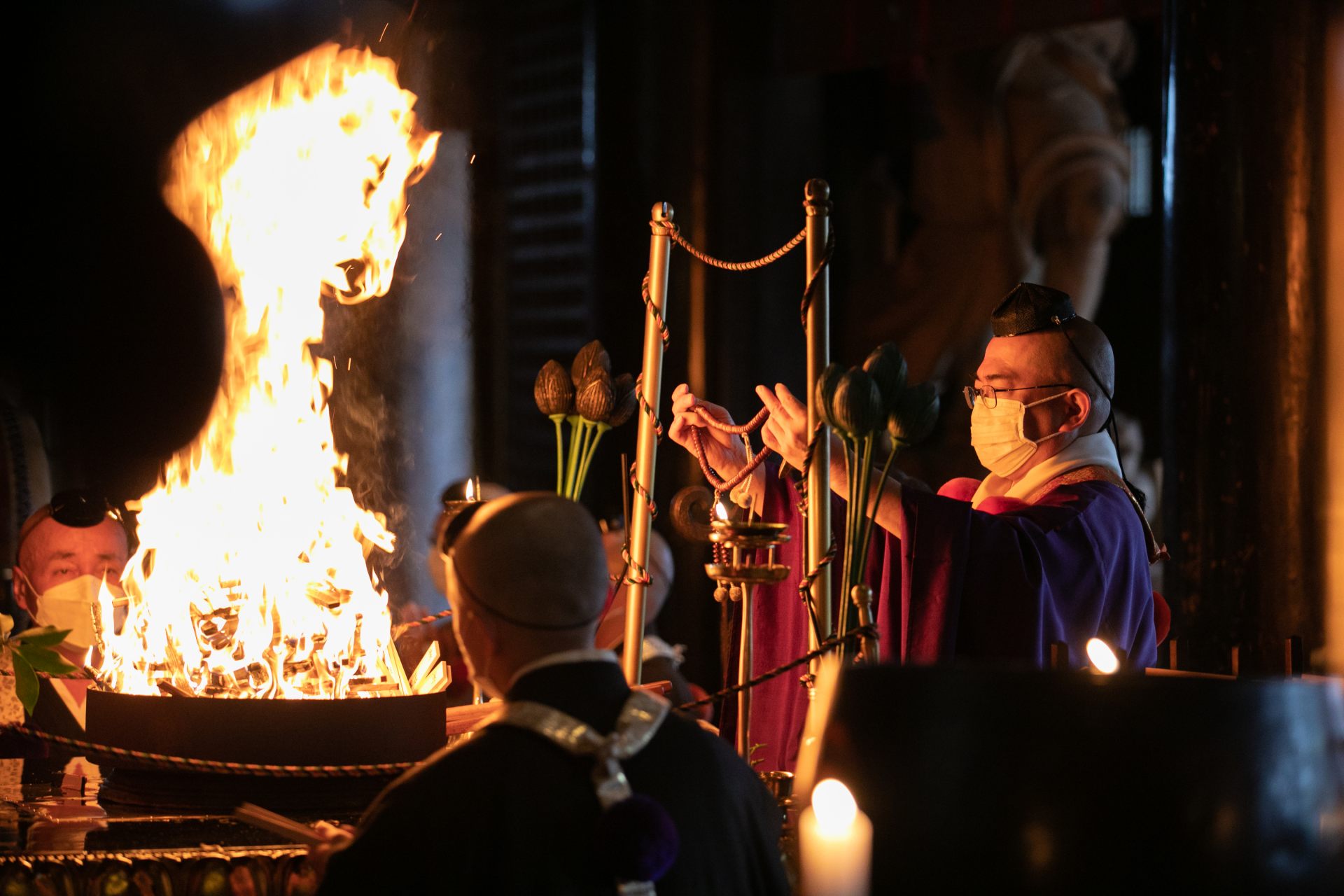 Yoshino in Nara Prefecture is famous for its Japanese cedar and cherry trees. Located at the northern end of the Omine mountain range that stretches over 150 kilometers from Nara Prefecture to Kumano in Wakayama Prefecture and surrounded by deep, rugged mountains, this area has been called the "land of the gods" since antiquity and is one of the centers of Japanese religion. Indeed, even today, Shugendo, a Japanese mountain asceticism that blends Shinto and Buddhist concepts, is alive and well, with the faithful continuing to practice and pray in the midst of nature.

This special cultural tour takes participants to Kinpusenji, the head temple of Shugendo, and its main hall, Zaodo, located midway up the slopes of Mt. Yoshino. There, a monk with experience practicing Shugendo at the temple will introduce you to the faith observed there since ancient times.

Yoshino, a center of asceticism since time immemorial 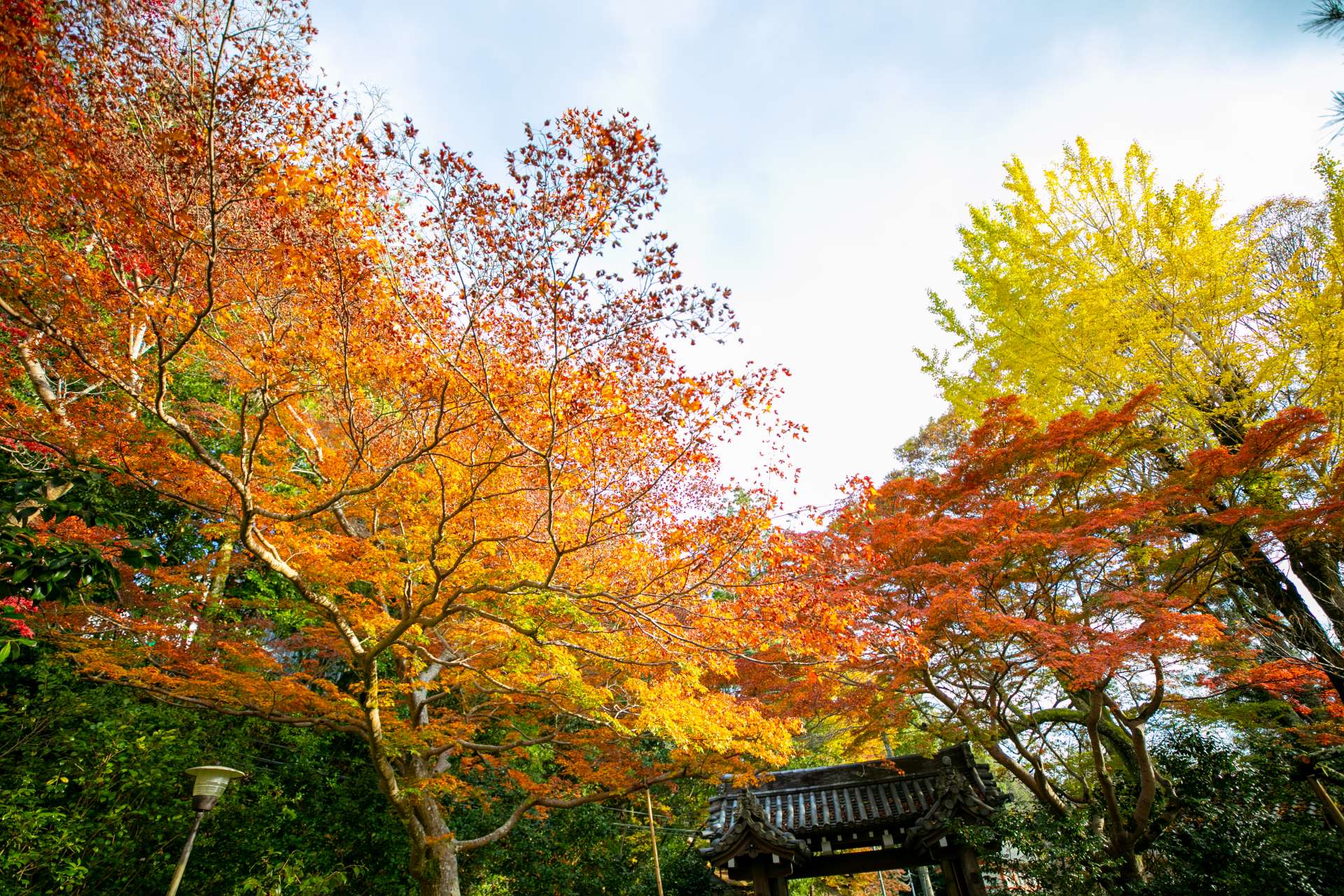 In the abundant and harsh nature of Yoshino, the practice of Shugendo, a spiritual practice peculiar to Japan, continues uninterrupted.

The pilgrimage route connecting the southern part of the Kii Peninsula (Yoshino-Omine, Koyasan, and Kumano Sanzan) was registered as a UNESCO World Heritage Site in 2004 under the name Sacred Sites and Pilgrimage Routes in the Kii Mountain Range. At the heart of this route is the towering peak of Mt. Omine and, rising from the mountainside, Kinpusenji Temple.

Shugendo is an ancient Japanese faith of mountain asceticism, which has developed into a unique religion by blending age-old Japanese mountain beliefs with Shintoism, Buddhism from the Asian continent, and Taoism. According to tradition, Kinpusenji was established by the founder of Shugendo, En-no-Gyoja (634–706), when, after training for 1,000 days atop Mt. Kinpu (an area stretching from Mt. Yoshino to Mt. Sanjogatake), he received a divine vision of Kongo Zao Gongen and carved his likeness into a mountain cherry tree, enshrining him.

Initially, Zaodo was built on the mountain summit where En-no-Gyoja was said to have prayed. However, as Shugendo is followed by people of all ages, genders, and physical abilities, a second Zaodo was established on Mt. Yoshino, the lower part of Mt. Kinpu, to allow access to those not able to reach the original Zaodo.

Zao Gongen, who shows the way through ferocity and compassion 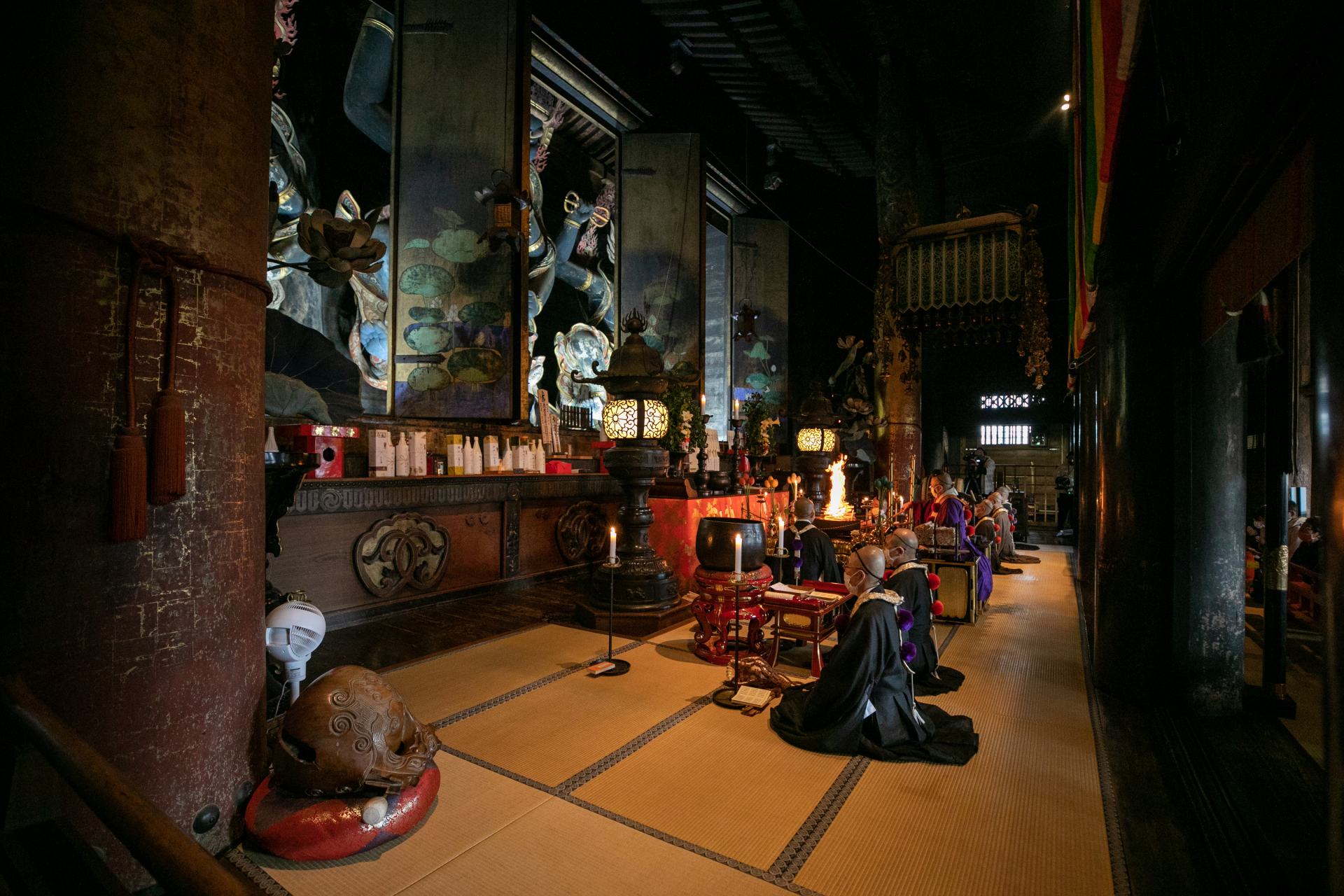 Kinpusenji’s Zao Gongen statues are enormous hibutsu (Buddhist statues usually hidden from public view).
The central statue is 7.28 meters, while the statue on the right is 6.15 meters and the one on the left is 5.92 meters.

Kinpusenji comes into view soon after starting out on Mt. Yoshino's pilgrimage route. The building that can be seen is Zaodo, the main hall. Standing 34 meters high, it is constructed of pillars made from 68 enormous trees native to Mt. Yoshino, including Japanese cedar and azalea. The hall boasts a high ceiling, and in the inner sanctum are enshrined three of Japan's largest hibutsu. These statues of Zao Gongen are the temple's principal objects of worship and can only be seen during special openings.

Zao Gongen is said to be a syncretism of the Buddha Triad of Shaka Nyorai, Senju Kannon, and Miroku Bosatsu. Fangs bared, seemingly boiling with rage, Zao Gongen is a fearsome-looking deity—and he is so for a reason.

According to tradition, En-no-Gyoja was visited by three deities while praying: Shaka Nyorai, gentle in form; Senju Kannon, who changed form to save all living beings; and Miroku Bosatsu, who is said to save people in the distant future. However, En-no-Gyoja believed a more powerful Buddha was necessary to save people given the turbulence of the times. In response, the formidable figure of Zao Gongen appeared.

Not everything about Zao Gongen is designed to strike fear into the souls of humankind, however: the blue of his body symbolizes mercy and generosity. Indeed, behind the menacing appearance lies the stern yet kind compassion of a father and mother.

Prayers for the betterment of oneself and the world 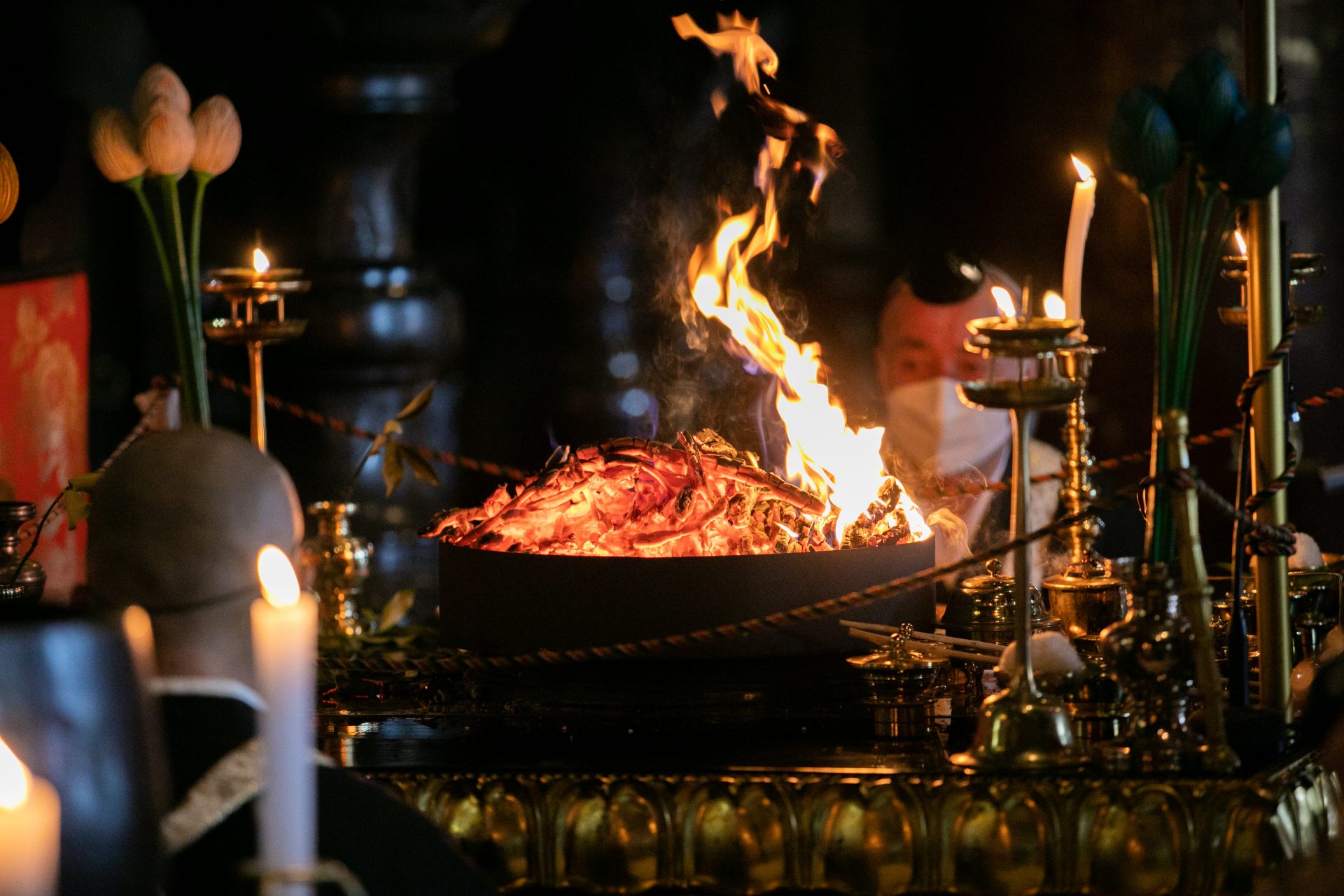 The purpose of the goma fire ritual is not simply to extinguish one's own worldly desires and sins; it is also an offering to Shinto deities and Buddha and a prayer for peace.

In the inner sanctum of Zaodo stands a goma-dan (fire altar). This is where the temple’s daily goma rituals are performed. Shugendo practitioners sit around the inner sanctum, chanting the mantra of Zao Gongen to the beating of drums as the head priest casts the goma-gi (wooden prayer sticks) into the goma-dan. It is a deeply stirring scene: the powerfully resonant mantra, the body- and soul-stirring rhythm of the drums, the flickering flames, the haunting sounds of horagai (conch shell trumpet) occasionally ringing through the sanctum.

The ceremony is sublime in its solemnity. The goma flames represent the fire of Nyorai's wisdom, through which we connect with Shinto deities and Buddha, burn away our worldly desires and sins, and pray for good health. The timbre of the horagai is also said to ward off evil.

The goma ritual is not only a way to purify our sins, but also a way to pray for the peace of the nation and the world. In the mountains of Yoshino, this prayer has been offered for over 1,000 years without interruption.

Grounds steeped in the history of the Nanbokucho (Northern and Southern Courts, 1336–1392) 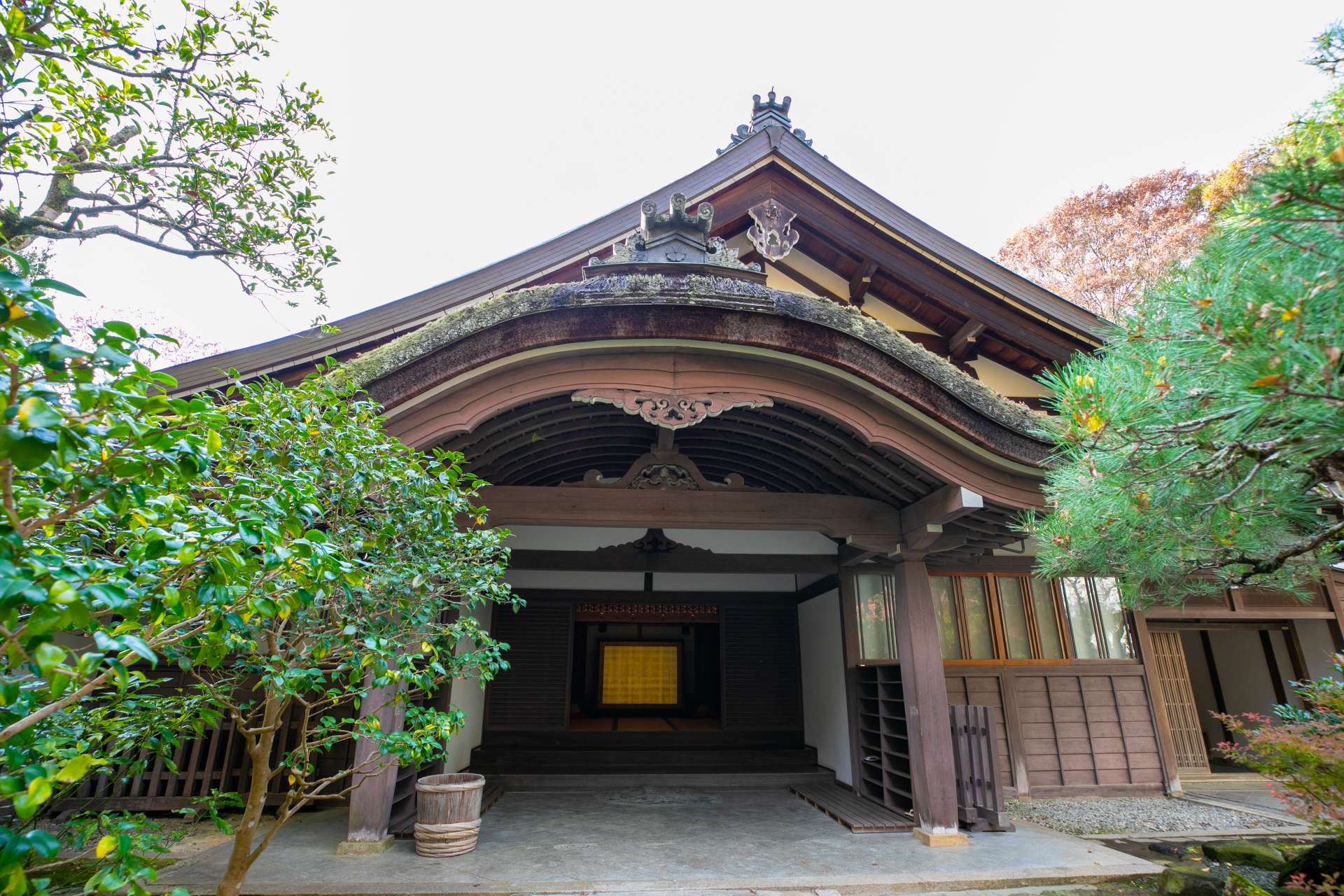 The Honbo, known as Chisenkaku, is located to the north of Zaodo. It features a magnificent gabled roof.

After tea at the Honbo (Chisenkaku), enjoy a tour of Zaodo, the main temple building, with a monk. Schedule permitting, visitors may even have the opportunity to meet the head priest of Kinpusenji, Gojo Ryochi.

On the tour, you’ll hear all about Shugendo founder En-no-Gyoja and the deity Zao Gongen, the origins of Shugendo, and the ascetic training and everyday life of Shugendo practitioners. The history of Shinto-Buddhist syncretism and honji suijaku, the belief that Japanese deities are local manifestations of Buddhist deities, are also discussed. Post-tour, drink in the history of Yoshino and the spirit of Shugendo while admiring architectural and historic sites around Zaodo.

During the Nanbokucho period of the Northern and Southern Courts, which lasted from the end of the Kamakura period (1185–1333) to the beginning of the Muromachi period (1336–1573), Yoshino was the center of the Southern Court established by Emperor Go-Daigo (1288–1339). At that time, Kinpusenji Temple was the location of Jitsujoji, a temporary residence of the emperor. Today, Nancho Myohoden Hall stands where the residence once was. The hall enshrines the four emperors who ruled the Southern Court as well as their loyal retainers.

To the south of Zaodo are the remains of Nitenmon Gate, through which ascetics and pilgrims once entered the temple grounds. There is a legend that in 1333, when forces of the Kamakura Shogunate attacked the Southern Court, Murakami Yoshiteru (1333 died), a loyal retainer of the Southern Court, committed seppuku (ritual suicide) on this gate in place of Prince Moriyoshi of Otonomiya (1308–1335), allowing the prince to escape from Yoshino.

On Mt. Yoshino, you will find a spiritual presence and a sincerity of devotion that can only be described as awe-inspiring. One cannot help but marvel at the Shugendo faithful who pray for peace on earth while imposing upon themselves rigorous ascetic practices.

Kinpusenji has stood on the slope of the mountain for 1,300 years. In addition to the four emperors of the Southern Court who based their courts there, many emperors and aristocrats have visited the temple since the Heian period (794–1185). There have been challenges to overcome, such as the state-imposed separation of Buddhism and Shintoism during the Meiji era (1868–1912), but Kinpusenji continues even today to preserve the vitality of Shugendo and act as a gathering place for practitioners of the faith.

Visiting this ancient temple surrounded by dense forests of mountain cherries, you will have the rare opportunity to explore the history and practices of Shugendo, and in doing so, experience the spirit of this mystical faith unique to Japan. 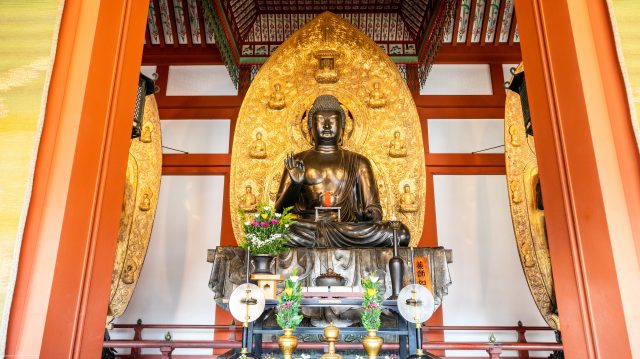 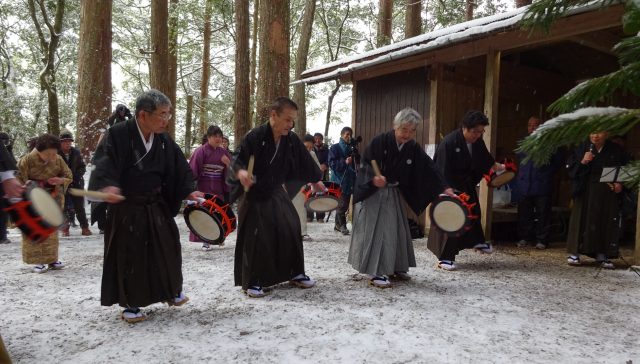 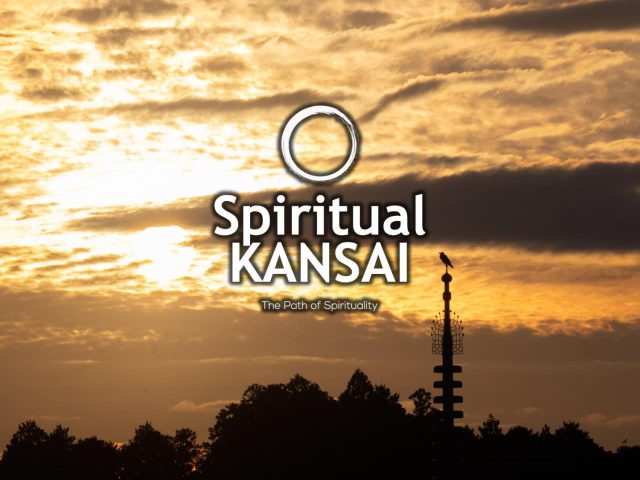