The Elegant Symbol of the Samurai 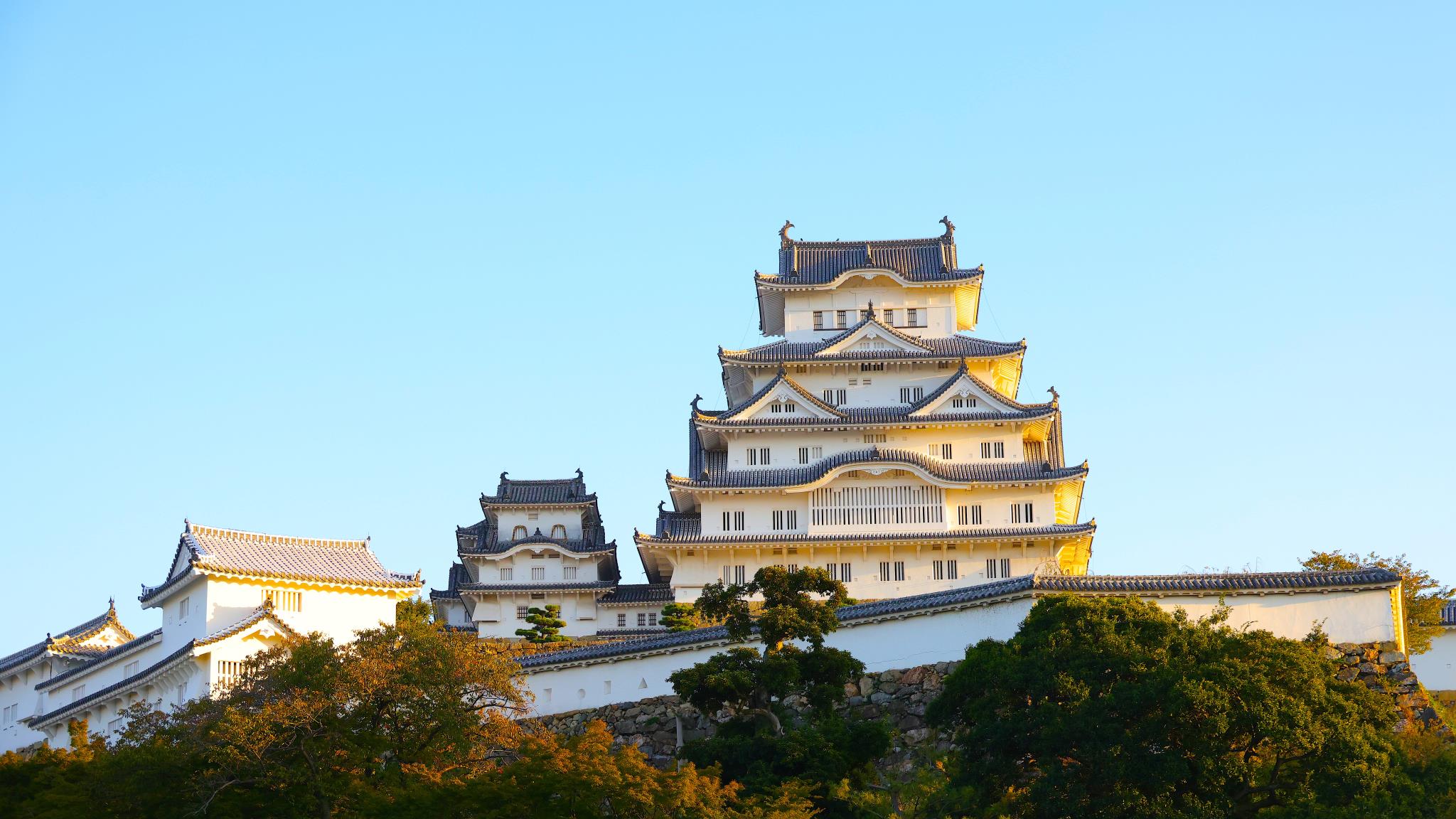 Throughout Japanese history, the Kansai area was one of the most contested regions of all, with various warlords all vying for the valuable lands and staking out their battle won territories with protective castles. Many were simple Yama-jiro, hilltop fortresses built on mountain peaks shaved flat to form baileys and surrounded by trenches, earthworks, gates and palisades. They featured guard houses, living quarters, kitchens, stables and defensive watchtowers. As warfare increased, so too did the size, the role and the complexity of the samurai castle. Yama-jiro became bigger and more elaborate, Hirayama-jiro, larger castles built on hills and the flat-lands around the base, and the larger, grander Hira-jiro, highly fortified castles built on plains were developed and refined.

Japanese castles were more than just military installations, they were symbols of authority, and as such they were beautifully constructed, possessing both form and function. No two castles are the same, the positioning, the layout, the structural design of the keeps, watchtowers, gates and palaces, and many of the defensive devices differed greatly too. Indeed, the samurai were proud of their military, and their aesthetic senses. Most castle visitors tend to focus only on the iconic tenshu, the tower keeps, completely misunderstanding that the keep is not the castle! A castle is not a building, but a fortified location, consisting of moats, walls, gates and structures.

Thousands of castles once dotted the Kansai landscape. Some were destroyed in battle or were simply abandoned when no longer needed. After 1590 when the warlord Toyotomi Hideyoshi gained control of the nation, there were 204 active domains, with most daimyo warlords possessing one or two major castles and numerous smaller castles to protect their fiefs. Hideyoshi ruled that only the daimyo under his direct command be allowed castles, forcing many warlords to abandon their fortifications. In the early 1600’s the Tokugawa clan became dominant, and a similar law, the Ikkoku Ichijo rei, permitted only one castle per domain, and so many more castles were discarded. Others were destroyed by earthquake or typhoon, from lightning strikes and accidental fire, and so slowly but surely, numbers were reduced.

In 1868, the 260-year reign of the Tokugawa Shogunate collapsed and national control was restored to the Emperor Meiji. Financially unable to maintain the upkeep of these feudal era structures, many castles were demolished. Many surviving castles were destroyed during WW2 aerial bombing. Thankfully, some of the more historically important and most fascinating castles can be found in the Kansai region. Here are a few Must-See locations;

Completed in 1609 following the Battle of Sekigahara, Himeji’s keep stands 31.5 meters high atop a 14.85 meter stone base. The main keep complex is a box shape configuration with the main tower connected via defensive corridors to three smaller sub-keeps around a small central courtyard. Himeji has the most remaining structures of any castle. The tower keep was designated a National Treasure in 1931, while 74 other structures are Nationally Important Cultural Properties. Himeji Castle and Nara’s Horyu-ji Temple became Japans’ first World Cultural Heritage sites in 1993. Give yourself plenty of time to explore the keep, turrets, walls and moats of this magnificent castle. 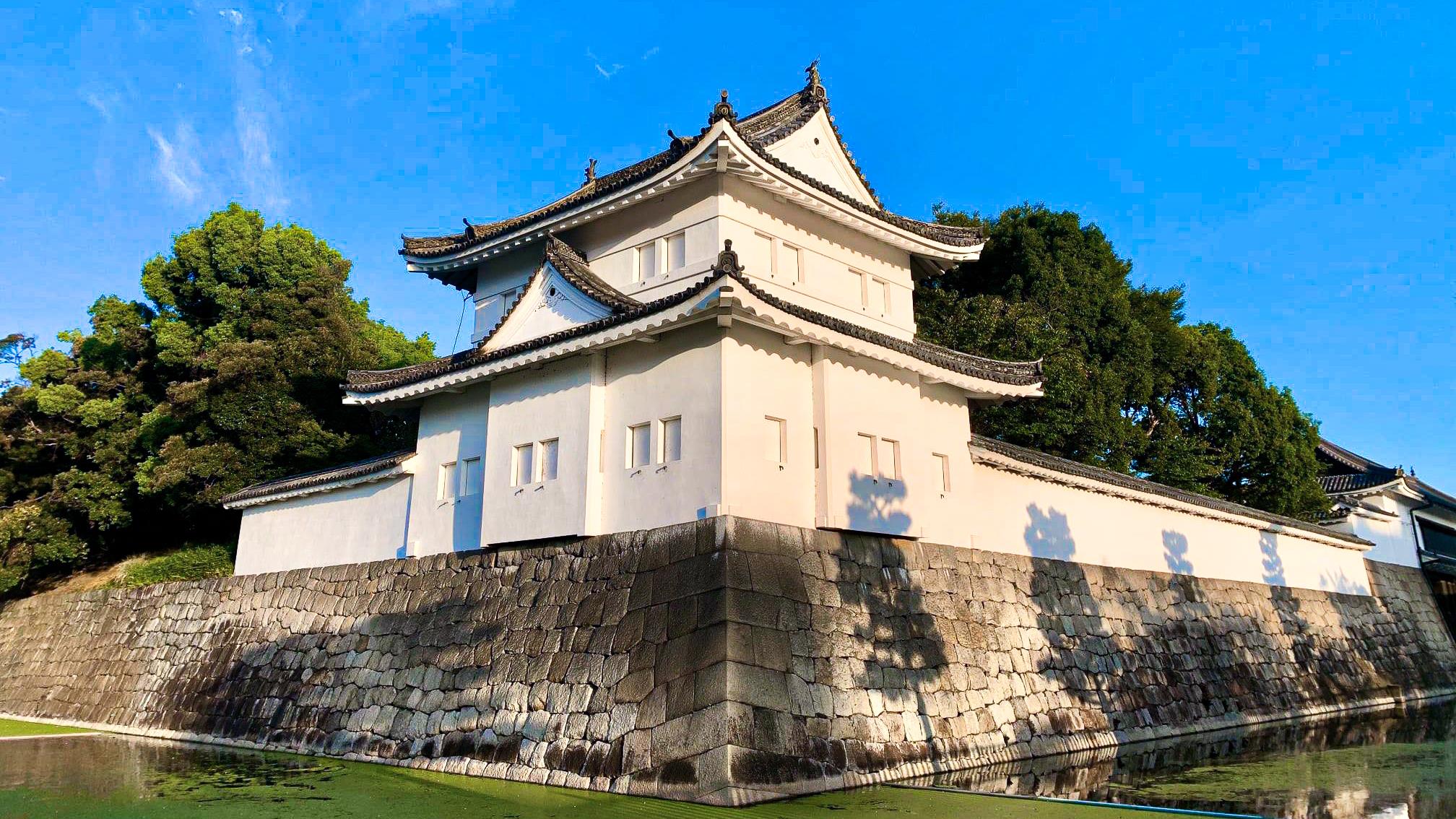 Nijo-jo Castle in central Kyoto City was built by Tokugawa Ieyasu in 1603, and completed in time for his investment as Shogun. Nijo-jo served as the Shogun’s official lodgings in the capital, the venue for Kyoto’s political rituals, to protect the Imperial family and from 1884 as the Imperial Villa.

This castle saw the rise and the fall of the Tokugawa Shogunate. Tokugawa Ieyasu was invested as Shogun, and 14 generations later, the last Shogun, Tokugawa Yoshinobu, resigned his post here in 1867, restoring control of the nation to Emperor Meiji, ending the feudal period.

Nijo-jo Castle’s five-story tower keep, from which the Emperor enjoyed views of Kyoto, was destroyed by lightning in 1750, and only the stone base remains. Instead, Nijo-jo’s exquisite gardens, stunning gates and the Ni-no-Maru Palace are the focal points. The elegant palace features over 30 rooms including the most splendid O-hiroma, formal audience chambers, where the lord met with his vassals. Over 3,600 gold-leaf gilded partitions inside the lavishly decorated palace featured delicate artworks painted directly onto the gold, and 1,016 of these works are listed as Important Cultural Properties.

Six of Nijo-jo’s remaining buildings have National Treasure status, another 22 structures including the main gates and turrets are Important Cultural Properties. Nijo-jo Castle’s Karamon gate with its glittering gold fittings and exquisitely carved is an iconic Kyoto scene and a particularly popular photographic spot. The castle was registered as a World Cultural Heritage site in 1994. 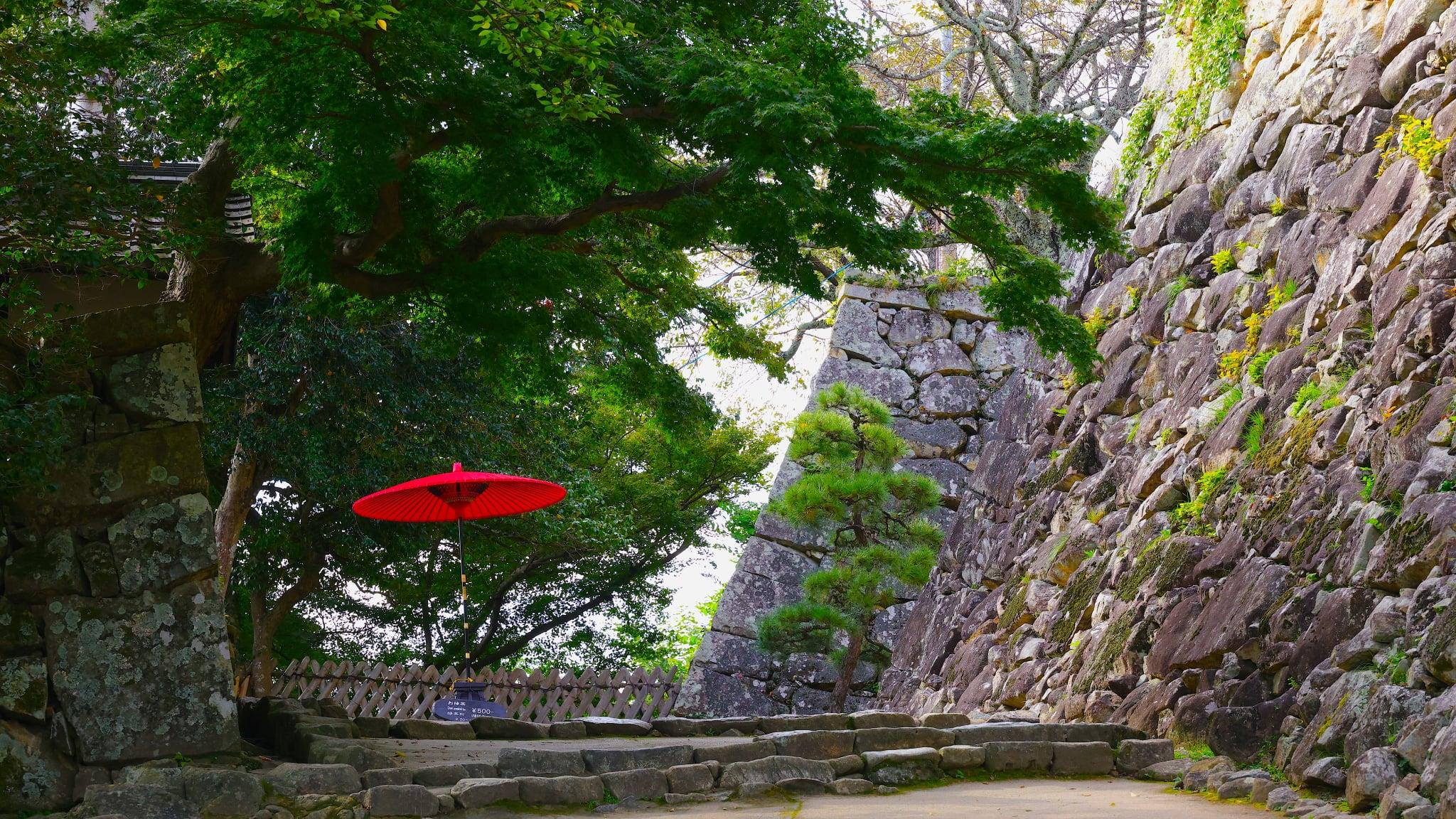 While most castles were slated for demolition at the end of the feudal period in 1868, Hikone Castle was spared from destruction on the orders of Emperor Meiji, who, having seen it while passing through the Hikone area, considered it beautiful enough to warrant preservation.

Hikone Castle now remains as one of just five National Treasure keeps. The hilltop castle was constructed on the orders of Ii Naomasa, awarded the region for his efforts in the Battle of Sekigahara. Naomasa later died of wounds sustained at Sekigahara, and so his sons oversaw the completion.

A number of other structures classified Important National Cultural assets also remain, including the Tenbin Yagura Turret, the Nishi-no-maru Sanju Yagura, the Taikomon Turret, and the original stables. The extensive Genkyu-en and Rakuraku-en daimyo gardens are beautiful year round, and feature a number of traditional structures and tea houses, along with one of the few remaining castle lord’s residences.

Should attackers ever make it as far as the modern ticket office, there were more surprises in store. On entry, the sloping path to the main bailey looks gentle, almost easy, however the design is deceptive. Created to hinder the advance of intruders, the pacing distance and height of each step varies, making it difficult to maintain momentum, particularly for heavily armored warriors under combat conditions.

At the top of the slope, attackers would find themselves confined to a deep defensive trench below the Rokabashi Bridge, then make three left turns spiraling up heavily guarded ramparts to cross the bridge, all under full view of the wide Tembin Watchtower. The bridge was collapsible, effectively cutting off access to the main central bailey.

Hikone keep’s interior design using odd-shaped timber beams is of great interest, particularly as it was constructed from the recycled remains of nearby Otsu Castle’s keep, damaged during a battle. Below the castle is a fascinating museum designed to resemble the lord’s mansion, dedicated to the ruling Ii clan, and containing original suits of armor, weapons and items used by the warrior family. Shiga Prefectures’ Hikone Castle is ideal for understanding samurai castle defenses.

Sasayama Castle, also known as Kiriga-Jo (Paulownia Castle), is a flatland castle in Hyogo Prefecture’s Tamba region. In 1609, Tokugawa Ieyasu ordered 20 daimyo to complete the entire complex within six months, as it was to be used as a stepping-stone in Ieyasu’s desire to attack Osaka.

Todo Takatora, one of the foremost samurai castle architects of all time, was responsible for the simple yet highly effective design and impressive stone walls. The three main gates are well positioned, and surrounded by rare Umadashi, special defensive ramparts around the gates. Sasayama had a tower keep base built, however a keep was never constructed. Instead, two three-story yagura watchtowers and 13 two-story watchtowers protected it. One story regarding the lack of a tower keep was because Sasayama was so well designed, the Shogun Ieyasu feared that it could be used against him if ever taken. In truth, plans for the keep were abandoned as Ieyasu was desperate to wipe out the rival Toyotomi clan in Osaka and wanted to commence construction of Nagoya Castle.

Sasayama Castle was demolished in 1871 after the feudal period, however the O-shoin, main palace building, survived until 1944, before being gutted by an accidental fire. The palace was reconstructed in 2000 using old photos and architecture plans of Kyoto’s Nijo-jo and Nagoya Castle’s palaces. Parts of the old castle town still also exist, along with a number of traditional samurai houses now preserved by the local government.

Takeda Castle, The Castle In The Air

At certain times of the year when the weather conditions are right, the basin surrounding the ruins of 353 meter high Takeda Castle fills with fog, leaving only the mountaintop and the stone hewn ruins of Takeda Castle peeking out above, giving it the image of floating in the clouds. Built around 1443, today only the stone wall ruins remain, and so Takeda Castle is known as the Machu Picchu of Japan.

Designated one of the Top 100 Castles of Japan, Takeda Castle was built by shaving the mountain tops and ridges flat to form baileys, and carved to create steep sides, which were then encased in walls of stone sourced from local mountains, cut and carried up the steep, narrow paths and set by hand. This, like all other castles, was done without bulldozers, cranes or trucks to assist. Discover your inner Indy Jones exploring the ruins of Hyogo Prefecture’s Takeda Castle.

The Gravestones of Fukuchiyama Castle

Fukuchiyama Castle was built by the warlord Akechi Mitsuhide on the orders of his liege lord, the first of the national unifiers, warlord Oda Nobunaga in 1579. Mitsuhide chose the site well, utilizing a large hill in the middle of the Fukuchiyama Basin surrounded by the natural moats of the Yuragawa River.

Three years after completing Fukuchiyama, Mitsuhide betrayed Nobunaga, killing him in 1582. The reasons why remain one of histories greatest mysteries. Fukuchiyama remains one of his greatest achievements.

Castles had to be constructed in great haste, lest the enemy attacked before completion, and in his rush to get Fukuchiyama Castle done, Mitsuhide used gravestones from local temples and stone lantern bases in the keep’s stone support. Over 500 such stones can be seen within the walls. Demolished after the Edo period, Fukuchiyama’s keep was reconstructed in 1986, and now serves as a fascinating museum, proclaimed one of the extended Top 100 Castles of Japan.

The Kansai region is literally covered in castles and castle sites, most towns have at least one if not more sites. Each castle differs in size, design and each has a wonderful story to tell. This list barely scratches the surface, but provides a starting point to see and discover the power, the might, and the creative spirit of the samurai.