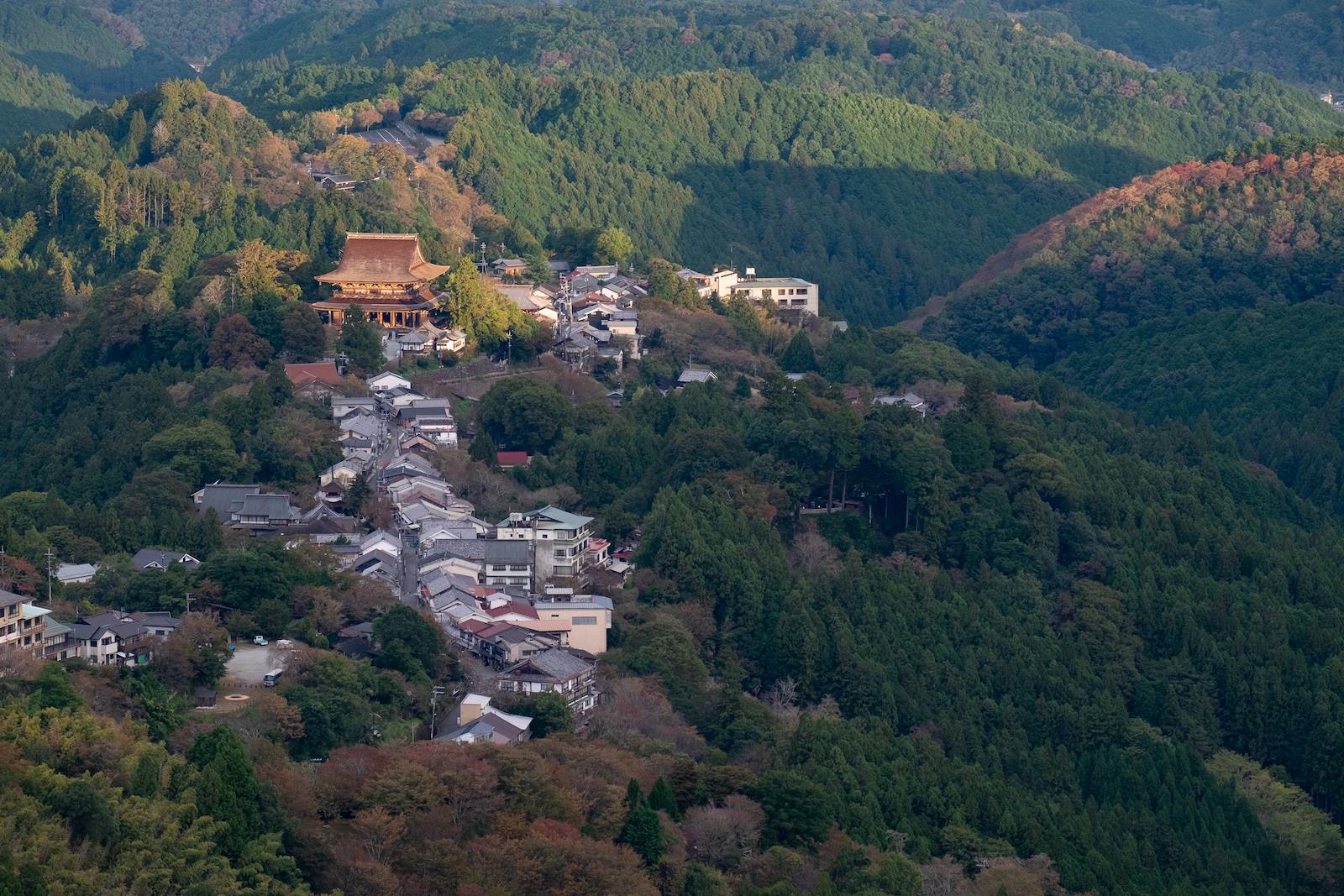 The rain has just stopped. The vegetation damps awakening its colors. The mist that caressed the treetops is dissipating and the waterfall eventually appears. The sound of the rain has gone and now only the sound of my footsteps can be heard on the rough cobblestones of the path that criss-crosses the holy mountain. At the end of the path, a complex of temples. The geometry of the curves of the buildings contrasts with the random landscape.

At first, it seems more difficult than anywhere, to define wherever we are in a place dominated by Shinto kami or the Buddhist pantheon. A complex mix that forces us to ask ourselves some questions. In the area of Yoshino, on Mount Koya, but also on the paths to Kumano, it is possible to sense the very essence of Shugendō, this spiritual tradition that unites the different Gods, with the same delicacy as two hands joining to pray.

Beyond all divine representations, even more than the Buddhist statues, the true God of this region is the nature surrounding the spot. The sun illuminating the tips of the trees. The water flowing from the top watering the roots. The moss recovered every damp surface. The buds are ready to appear under the snow and then the leaves turn from green to red in an endless cycle.

The way of Shugen

The Shugendō is composed of Buddhist monks attached to temples open to teaching principles of En no Gyōja, the founder of this school of thoughts. Some monks may also, if they are willing to make the effort, dress up for different rituals during the year, the clothes of the yamabushi, the ascetics of the mountain, with the characteristic clothes and sound of the horagai, a large triton shell used as a musical instrument. Another surprising aspect of Shugendō is that it is not necessary to be a monk to become a yamabushi. There are many men, office workers for example, who dress up as the yamabushi when needed. Especially to take part in fire ceremonies, which are important moments in the rituals of Shugendō. 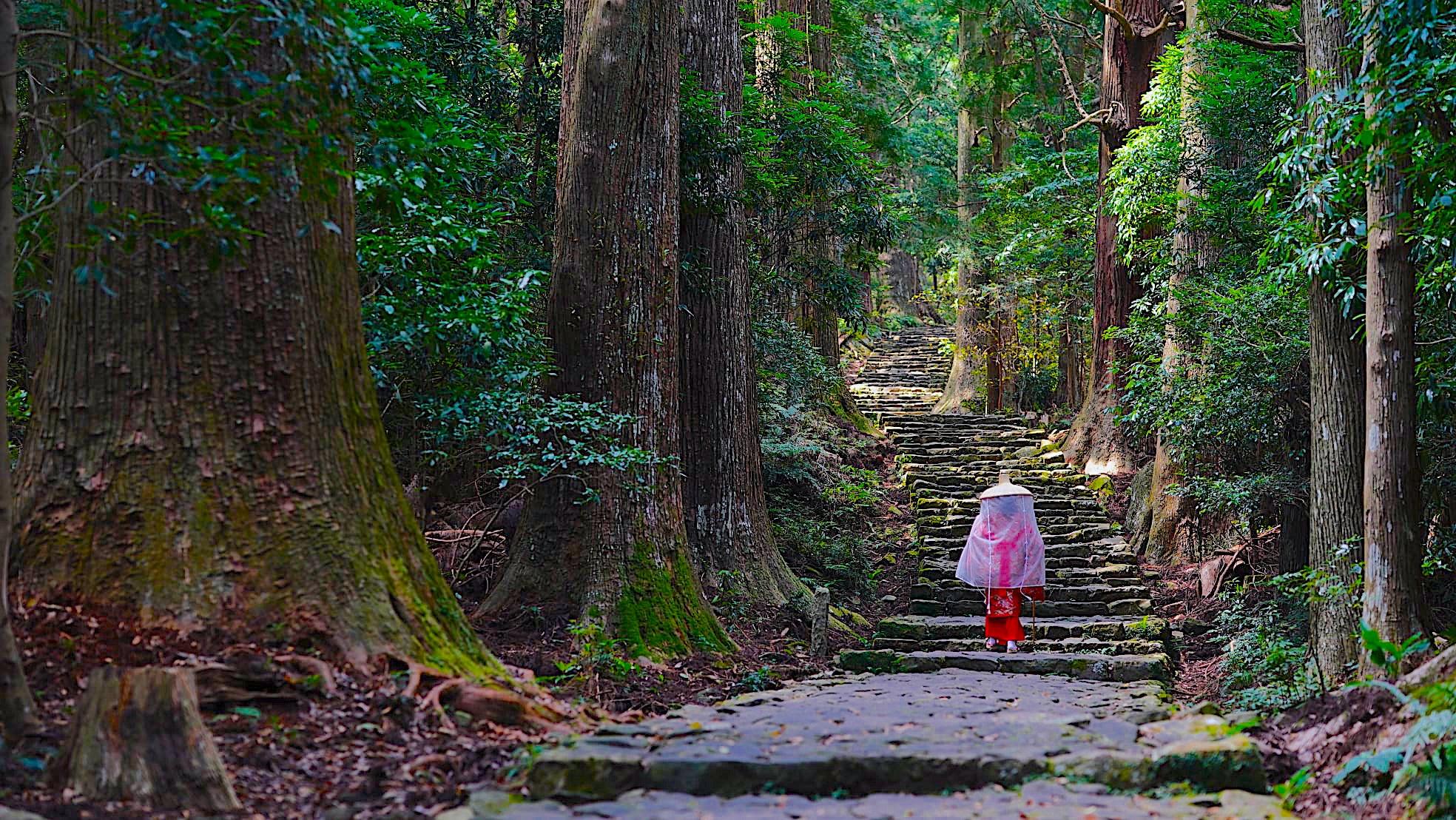 The Kinpusenji, located in the heart of the village of Yoshino is considered as the biggest temple of Shugendō. Its main building, with a 34 metres high, is the second largest wooden construction across Japan, after the Todaiji Buddha Hall in Nara. It houses three statues of Zao-Gongen, a divinity who appeared in the mind of En no Gyōja when he retired to pray for 1000 days at the top of Mount Omine. The lonely hermit had no brush or paper to reproduce what appeared on his mind so he took his dagger and carved the features of the god in a cherry tree trunk. And just like that, began the long love story between the cherry trees and the mountains of Yoshino.

Usefull information about the statues of Zao Gongen:

These impressive statues, about 430 years old, can only be seen for about a month every year in the middle of autumn.

This temple, located in Kawachi-Nagano down the south of Osaka, was founded by En no Gyōja, the ascetic who initiated the tradition of Shugendō. Later on, the place has been renovated and completed by Kukai, the well known monk founder of the Shingon Buddhism. Located halfway between Mount Koya, Nara and Kyoto, Kanshinji has always been an important stopover for pilgrims. In addition to the beauty of its landscapes in autumn or its buildings and statues, there is a very interesting little secret hidden in it: a symbolic version of the ohenro, the pilgrimage route of the 88 temples of Shikoku. Around that place, it is possible to find numbered paving stones wrapping themselves around statues of Kukai and En no Gyōja to miniaturise the famous route. This shortened version allows those who cannot afford to make the real pilgrimage a chance to follow the spiritual footsteps of Kukai.