Regional revitalization of Arima Onsen by ‘Gyouki’, a monk of the Nara period

Arima Onsen (有馬温泉) of the Hyogo Prefecture (兵庫県) is valued as one of Japan’s “Three Ancient Springs”. There were mentions of Arima Onsen in the “KOJIKI (古事記 / Record of Ancient Matters)” and the “NIHON SHOKI (日本書紀 / The chronicles of Japan)” which were the oldest known history books of the Nara period. Likewise, the Nanki-Shirahama Onsen of Wakayama Prefecture (和歌山県) and the Dogo Onsen of Ehime Prefecture (愛媛県) also hold the position of Japan’s Three ancient springs.

The Initial opening of the Arima Onsen (有馬温泉) was by a buddhist monk of the Nara period, ‘Gyouki (行基)’. Gyouki was born in the Osaka Prefecture (大阪府) and entered priesthood at the age of 15. His teacher, Dosho (道昭) visited China and received the teaching of Xuanzang (玄奘法師), a Chinese buddhist monk. Later on, as Gyouki preaches the teaching of Buddhism, he also involved himself in the development of rice fields, irrigation projects, and bridge constructions, handling social work for the people. This would turn out to become of significant influence.

According to the history book of Arima Onsen, the spring origins were first discovered in the ancient times by two of the gods. “Oonamuchi no Mikoto (大已貴命)” *holding another alias as “Ookuninushi no Mikoto (大国主命)” and “Sukunabikona no Mikoto (少彦名命)”. These two gods are also worshipped at the Izumo Taisha Shrine (出雲大社) in Shimane Prefecture (島根県) which is one of the most famous grand shrines in Japan.

Related article about Izumo Taisha Shrine and nearby Onsen: God, rice, land, and ONSEN – KADA NO YU at IINAN Town

When the two gods descend upon Arima, it is said that three injured crows were healed after bathing in a puddle of water, and that water was believed to be an onsen (温泉). It has then been passed down that only the crows that has revealed the whereabouts of the Onsen were allowed to reside in Arima. They were referred to as “The Three Crows of Arima”.

The existence of Arima Onsen (有馬温泉) was discovered during the reign of Emperor Jomei (舒明天皇), the 34th emperor of Japan (year 593-641) and Emperor Koutoku (孝徳天皇), 36th Emperor of Japan (year 596-654). The name Arima took off as a result of an imperial visit by these two Emperors. It was written as a historical fact in the “Jomeiki (舒明記)” of “The Chronicles of Japan” that Emperor Jomei visited and enjoyed a bath at an Onsen at Arima “有馬” (Originally written as Arima “有間”) in the Settsu Province (摂津国) for 86 days from September 19th to December 13th in the 3rd year of Jomei period (631).

However, as Arima’s name became widely known, it gradually started to decline. The restoration of Arima Onsen and its foundation is said to be owed to monk Gyouki. He was trusted and held in high regards by the Emperor Shoumu (聖武天皇). Utilizing his skills, primarily in the building of ponds, excavation of drains, construction of bridges and temples. He was respected as a high priest who left many achievements and legacy behind. Gyouki also erected an Onsen temple as worship to Bhaisajyagaru (薬師如来), the buddha of healing and medicine. The Onsen temple is presently in great condition and is accessible to the public.

It can be said that Gyoki not only preaches his teachings in Buddhism, but pursued the convenience of the people’s livelihood as a local activity leader.

How is Onsen possible without a volcano?

As a matter of fact, there are no volcanoes near Arima Onsen (有馬温泉). There are 3000 Onsen sites in Japan, most of which are volcanic heated. Portions of the rain and snow are soaked up on the surface and becomes underground water. Those waters are then heated by magma, absorbing mineral components. Because of the fault of underground structure or together with development of artificial boring techniques, the spring streaming out is what you call a volcano heated Onsen. On the other hand, Arima Onsen is not volcanic heated. As underground temperature increases with depth, the water was heated sufficiently by terrestrial heat. Rain and ocean waters heated deep underground are what are called non-volcanic Onsen. This was how Arima came to be. Then why do Onsen (温泉) gush out?

In Arima there are two types of Onsen flowing, “Kinsen (金泉)” Gold Spring and “Ginsen (銀泉)” Silver Spring. Iron containing spring are originally colorless and transparent. However, when in contact with the air, oxidation begins and the spring transform its color into a unique reddish brown. Thus the name “Kinsen (Gold Spring)”. An iron and sodium chloride hot spring. Contrarily, the spring that does not change in color albeit coming in contact with air is a carbon dioxide spring, earning the name “Ginsen (Silver Spring)” in opposition to “Kinsen (Gold Spring)”. The former has a deep concentration of saline from ocean waters and is very salty to the taste.

Those salts assists with the formation of the sebum membrane and greatly boosts heat keeping efficacy from the body core. Moreover, due to the oxidation of iron and the amount of concentration, towels would be dyed red. Although Ginsen (Silver Spring) is categorized in a carbon dioxide hot spring, it also contains radioactive hot spring which contains miniscule amounts of radon. Carbon Dioxide spring which is acidic and slightly sparkling is in other words cider. The radon of such radioactive spring are said to accelerate metabolism. In any case, Onsen (温泉) is a “medicine you bathe in”.

Furthermore, there are scholars who performed chemical analysis on these two types of Onsen of Arima Onsen (有馬温泉). Experiment results being the detection of immense components stronger than ocean water. It was not groundwater which mostly consists of rain or ocean water, but ocean water which Philippines ocean plate sunken below the Japan’s land had brought. In other words, ocean water sunken below the Japan’s land together with this plate 6 million years ago was heated geothermally and trickles out from the fault’s crack. From this, the Onsen was concluded to be from very ancient times.

A gift from mother nature using earth’s abundant blessings. With a unique spring quality, due to the above reasons, in the Kinki region without volcanoes, Hyogo Prefecture’s Arima (兵庫県有馬) and Wakayama Prefecture’s Shirahama (和歌山県白浜) are developed as highly rare Onsen location. Counting from the present to 1300 years ago into the Nara period the Onsen has already been surging out. Hence imaginable as to why those of the imperial family and high ranks would unanimously want to visit.

In year 1583, when unification was about to be achieved, according to historical records, was when Toyotomi Hideyoshi took his first Onsen trip to Arima from Kyoto. By the time, Arima Onsen (有馬温泉) was already known for its famous hot springs. Hideyoshi Toyotomi then repeatedly visited Arima and provided various support. The large scale earthquake in Kyoto Fushimi in year 1596 resulted in a devastating effect on Arima. Therefore, in the following year 1597, knowing the ‘TOJI’ or healing effects of the spring, Hideyoshi decided on a huge repair work to be done. Since then, Arima has supposedly never perform repair work to the spring source. The decision made would in the span of 400 years after, greatly contribute to Arima’s prosperity.

Additionally, Hideyoshi also poured in his energy into tea ceremonies. Sen no Rikyuu (千利休) who was born in Osaka recommended tea as well as provided consultations to the politicians and warriors. Hideyoshi tremendously favored Sen no Rkyuu but would later greatly despise him. Sen no Rikyuu whom was also called out by Arima would open grand tea parties. How very intriguing the fabric of human relationships are.

The hot spring of Arima Onsen that we of the present day entrust ourselves to is apparently an ancient spring from 6 million years ago. Comparably, Hideyoshi’s history was only 400 years ago. Without a doubt, the history of those reading this article are probably just that of a few decades. Within such life which do not go beyond 100 years, pondering about 400 years prior and submerging in the ancient times of 6 million years ago. Could you fathom of such time slip? Personal worries seems trivial when engulfed by the Onsen (温泉) and as we sigh, it disappears within the vapour. This, is ‘TOJI’

Articles about this trip: 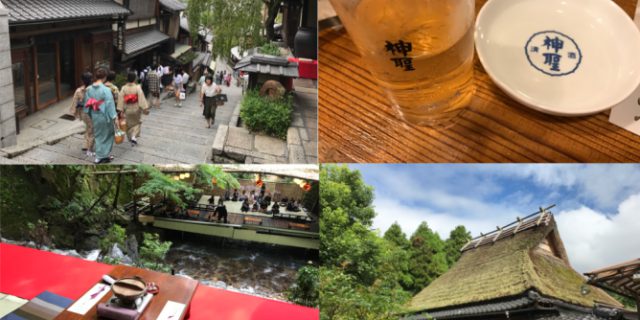 The Water Voyage – A trip to HYOGO ARIMA, KYOTO FUSHIMI, OHARA, and MIYAMA