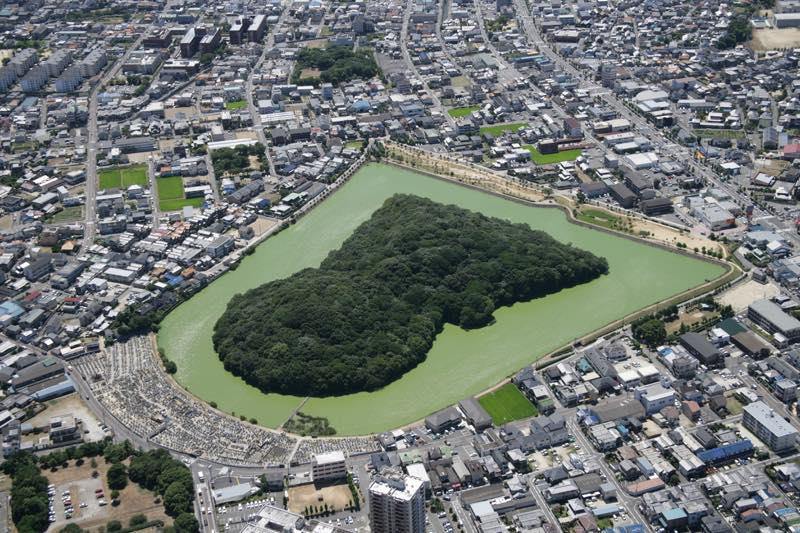 ・ Summary
The seventh largest keyhole-shaped tumulus in Japan, with an approximate length of 300m and located on the south-east edge of the Mozu Tumuli Cluster. The large, wide shape of the front section is considered the most refined and beautiful in the tumuli cluster, as well as being one of the later constructions, built in the late 5th century. The name Nisanzai is thought to originate with the Japanese for ""tomb of an emperor or empress.""

A keyhole-shaped tumulus located on the south-east edge of the Mozu Tumuli Cluster, with its front section pointing west. The tumulus mound itself has an approximate total length of 300m, with a 170m diameter and 24.6m high circular rear section and a 224m wide and 25.9m high straight front section. The mound is divided into three stepped layers, and on both sides at the ""neck"" section there is an overhang (a platform-like square). The structure of the main chamber and the burial accessories inside are unknown, but the presence of roofing stones and haniwa clay figures has been confirmed. There is currently a single shield-shaped moat running around the tumulus, but excavations in 1976 uncovered a second external moat.
This is a tumulus with a wide, solid front section, and it is almost four times the size of the Hanzei Tenno Ryo Tumulus (Tadeiyama Tumulus). As they were built at almost the same time, there is a theory that this is actually the Hanzei Tenno Ryo Tumulus. The Imperial Household Agency considers the burial mound to be an empty tomb of Hanzei Tenno, and manages the site having designated it a reference area for a tomb of an emperor or empress.
Indeed, the Japanese word for the tomb of an emperor or empress, ""misasagi,"" is thought to be origin of the name Nisanzai. The large, wide shape of the front section is considered the most refined and beautiful in the Mozu Tumuli Cluster, and it is also one of the later constructions, thought to have been built in the late 5th century.