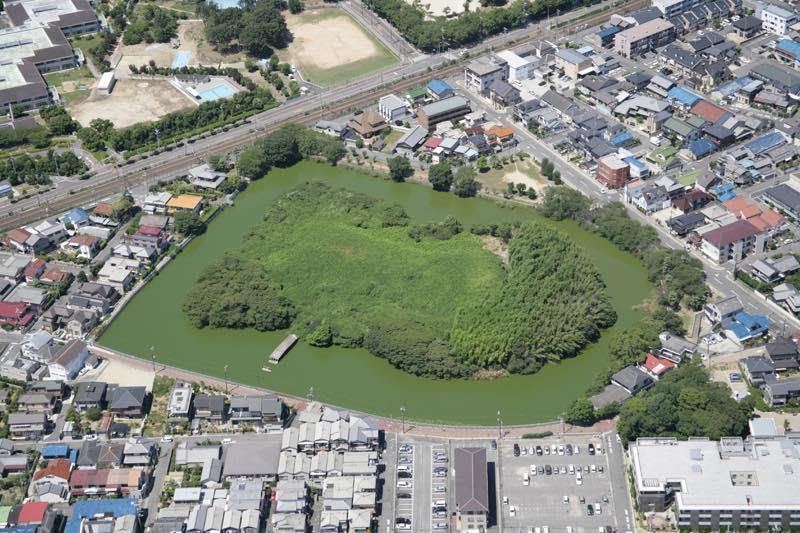 ・ Summary
The keyhole-shaped tumulus, the 8th largest in Japan and a nationally designated historic site, is located in the center of the Mozu Tumuli Cluster. When residential construction threatened to destroy it, the site was saved by a citizen’s movement, and the haniwa clay helmet excavated from within is now used as the logo mark for cultural preservation in the city.

A keyhole-shaped tumulus located almost in the center of the Mozu Tumuli Cluster, with the front section pointing west. The main tumulus was surrounded by numerous smaller accompanying tumuli, called “baicho”. Thought to have been built during the first half of the 5th century, it has a total length of 146m, a round part diameter of 90m and height of 12.2m, and front part width of 99m and height of 11.4m divided into three steps, as well as square platforms that jut out at the southern “neck” section. A haniwa clay statue of a helmet with a jutting front piece has been excavated from the rear section, which has roofing stones and haniwa. As it is located on the south edge of a plateau, there is a large embankment on the south side of the moat.
When residential construction threatened to destroy it the site around 1955, it was saved by a citizen’s movement. The haniwa clay helmet excavated from the end section at the time is now the logo mark for cultural preservation in the city.