Located in the northern part of Toyooka City, Hyogo Prefecture is the Kinosaki Hot Spring resort, which was awarded two stars by the Micheline Green Guide Japon. It is known as a town of history and literature because it has been loved by a number of writers, including the famous novelist Shiga Naoya, who wrote his novel “Kinosaki nite” based on his experience while staying in this area. A number of works of other writers related to the area are displayed at the Kinosaki Bungeikan Museum.

You can also see tourists in yukata (casual cotton kimonos) walking along the Otani River while visiting several public baths in this resort town. Along the banks of this river, black basalt rocks are uniformly stacked, stretching over some 600 m in distance. After the Kinosaki area was devastated by the great Hokutan Earthquake in 1925, these hard basalt rocks (“genbu-gan” in Japanese) were used to rebuild the area, and Genbudo, a massive nearby cave, provides the answer as to why this area was able to produce such a huge amount of basalt.
Genbudo, located about 10 minutes south from the spa resort by car, is a rock formation that was created 1.6 million years ago, after the volcanic eruption of Mt. Futami located behind the Maruyama River to the west. During the process of cooling, contracting and solidifying of the magma, beautiful and spectacular columnar joints with hexagonal cross-sections were formed. This cave actually consists of five caves, each named after four Chinese mythological creatures: Genbu (black tortoise), Seiryu (azure dragon), Byakko (white tiger), and Suzaku (phoenix). There are actually two Suzaku caves, one in the south and one in the north. In all these caves, there were a large number of split basalt rocks of different shapes and sizes; therefore, it was relatively easy to transport this material by boat to Kinosaki, using the nearby Maruyama River.

Genbudo is also one of the most important sites for geologists. In 1926, Dr. Motonori Matsuyama, a professor at Kyoto Imperial University (present-day Kyoto University), visited this cave and discovered that the geomagnetic field, determined by the iron contained in the basalt formed by volcanic activity 1.6 million years ago, was reversed from its present orientation. On discovering this, he posited a hypothesis that the Earth’s magnetic field had flipped its polarity in the past.
His suggestion, being quite incredible, was not taken seriously at the time. However, after his death, stripes of current polarity and reversed polarity were discovered on submarine mountain chains formed in locations where magma rises, and it was proved that eleven reversals of the Earth’s magnetic field orientation had indeed occurred over the past 3.6 million years. This finally gave Dr. Matsuyama’s hypothesis credibility, and has been applied worldwide in the process of ageing strata ever since.
Thereafter, this led to the establishment of the theory of plate tectonics that explains the movement of oceanic and continental plates, which is closely connected to the magnetic polarity reversal . This theory helps us understand that volcanic activity and earthquakes happen due to the movement of geologic plates, which causes collisions and frictions to occur.
To sum up, the evidence from the composition of Genbudo largely supported two outstanding discoveries at the global level: magnetic reversals and the plate tectonics theory. When you stand in front of the cave, with a compass in hand, it will indicate completely unexpected directions, and this is due to the magnetic levels recorded in the rock. At the Genbudo Museum, visitors can investigate this further and dig deeper into the history of Genbudo.

After Mt. Futami erupted, the Maruyama River became narrower due to the lava that flowed into the river, and this had a big impact on the lives of the people in the region. As the river water did not flow out to sea at the same pre-eruption levels, the area became more like a wetland, which allowed willow trees to grow in great numbers. As a result, the locals started the manufacture of bags made from willow, and even now Toyooka City is well known as the top bag producing area in Japan, with a number of bag manufacturers conducting business here.
Another change caused by the eruption was that a habitat for oriental white storks was provided for on the wetland. Toyooka City was actually home to the last stork in Japan, until it became extinct during the 1970s. However, the city has made a strong effort to bring these birds back to the wild, and now around 200 storks are presently in residence here. Furthermore, the city has introduced a natural farming method for rice production, in which storks play an important role as they eat the harmful insects that inhabit paddy fields. This chemical-free “Stork Natural Rice” supports Toyooka in its efforts to be seen as an environmentally-friendly city.

On Mt. Mitoku near the Misasa Hot Springs Resort in Tottori Prefecture, the Nageiredo hall of Sanbutsuji Temple is perilously situated in the mouth of a hollow on a sheer cliff, and is known as the most dangerously located national treasure in Japan. It was established as a temple of Shugendo, a religion that involves very hard ascetic trainings in the mountains, and the hall is often compared to the Meteora Monasteries in Greece, a UNESCO World Heritage Site that sits atop a group of monolithic rocks.

Nageiredo is located 200 m above the main hall of Sanbutsuji Temple, and to get there you have to climb up a perpendicular cliff face, traversing various dangerous obstacles while grabbing onto tree roots or chains to save yourself from falling. The hall is not visible to the climber at all on the way up, but then suddenly appears when one walks toward the back of the final rockface. There have actually been many accidents involving climbers due to the difficult ascent, which is very much like an ascetic training exercise itself.
It is believed that Enno Gyoja, the founder of Shugendo, threw three petals from a lotus flower over Mt. Mitoku with the place they landed becoming the site of this hall. According to this curious legend, he used the abilities that he had acquired from his training to throw the hall into the hollow on the cliff, and that gave it its name “Nageiredo,” meaning “thrown-in hall” in Japanese. It remains a mystery, even for present-day architects, as to how they managed to build this hall in such an amazing place.
The hall is actually officially named the Zaodo hall, and used to be home to seven Zao Gongen statues. Zao Gongen is an omnipotent deity that possesses the combined virtues of Buddha Shakyamuni, the Thousand-Armed Kannon, and Miroku Bosatsu. This deity originated in Japan, and is believed to have been brought out from a rock to the earthly world by Enno Gyoja. The faith related to this deity spread throughout the nation around the 10th century, and this temple is still visited by those who follow the religion. The Treasure Hall at Sanbutsuji Temple displays the seven Zao Gongen statues, and building materials from that were removed for repairs in 1914, to the general public.

The Genbudo cave and the Nageiredo hall —wonders created by the natural world and the human race— are important features that represent the energy of the Earth and the faithful worship of that energy that was developed in the San’in Coast region. 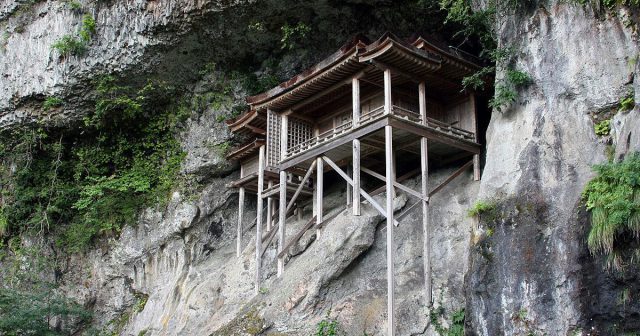 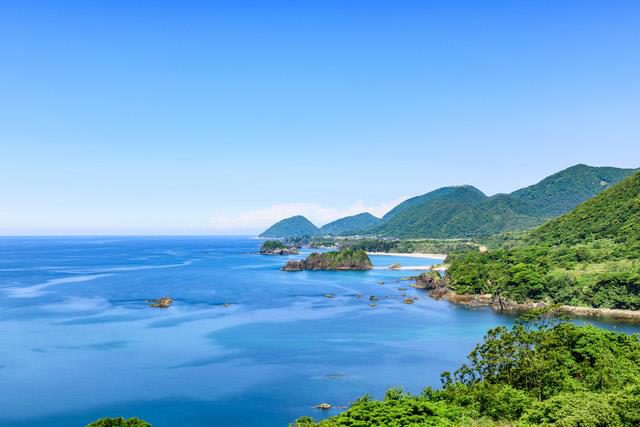 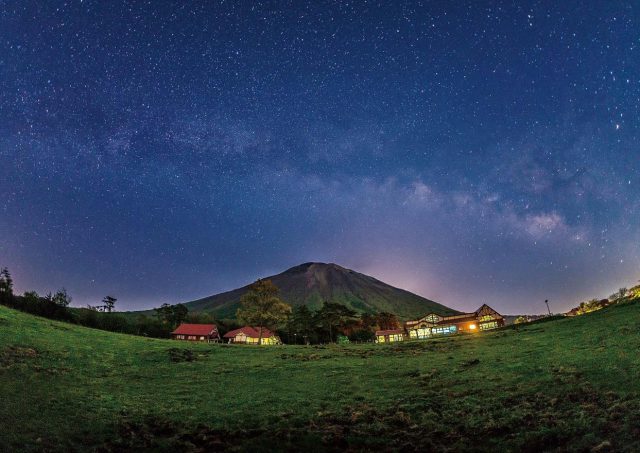